Service with a Purpose & Passion

Citizant’s purpose is to facilitate BETTER GOVERNMENT by serving Federal agencies with professional technical and business consulting services – particularly in support of Federal Chief Information Officers (CIOs) and Chief Data Officers (CDOs). Our passion is PEOPLE – our employees and their families, our trusted industry partners, the dedicated professionals who work for our government, and the citizens and warfighters we serve.

What Our Values Mean to Us

Citizant’s core values are the ties that bind all employees in support of our Mission and Vision.  Citizant employees succeed only when they share these core values with fellow employees. We hire, we reward, we coach, we promote, we counsel – all based on our five core values:

We pull our own weight, teach others how to pull theirs, and show up whenever a member of our tribe needs support.  Responsibility is about maintaining a sense of ownership, delivering on our commitments, and being mindful of our wake.

We create balanced outcomes, communicate our intentions with honesty and clarity, and honor our commitments.  Reputation is about building and maintaining trust.

We lean in to the hard work of empowering a vibrant and sustainable culture, creating jobs, developing leaders, communicating clearly, making a difference, and contributing to a greater outcome.  Drive is about courage, faith, and tenacity to deliver on commitments.

We focus on quality over quantity and value the journey of continuous process improvement and organizational maturity.  Delivery Excellence is about pride in our work and fulfillment as a result.

A Better Future is the reward given and received for living an authentic life of service – to each other, our customers, our loved ones, and our communities.  Better Future is about giving more than we take.

As a woman-owned and minority-owned business, Citizant has always naturally pursued the benefits of diversity and seeks to hire employees who share this part of our passion for people.  We recently created the following infographic to share how we’re doing in the many dimensions of diversity and inclusion.  (Click the image to expand it.) 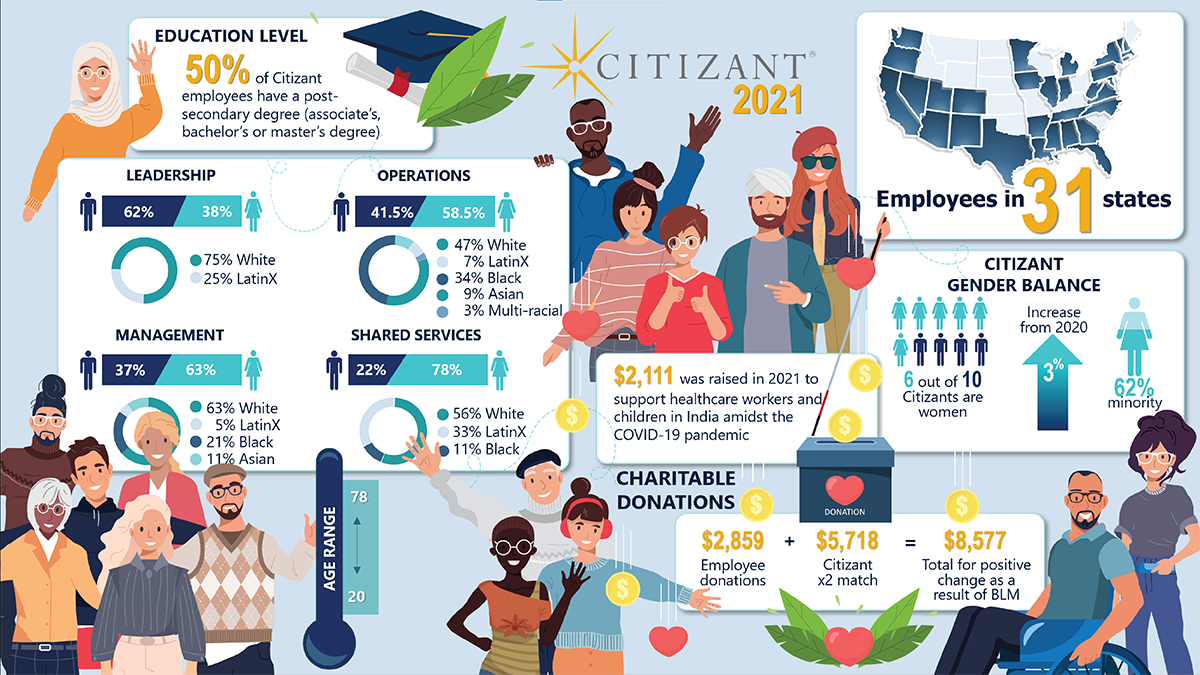 The Opinions that Matter Most

In 2017, Citizant conducted an employee engagement survey with the help of our friends at Leadership IQ, and 87% of employees participated.  This world-renowned consultancy said that our engagement scores were among the best they’d ever seen.  When it comes to whether employees would recommend Citizant as a great organization to work for, we scored higher than 94% of other organizations.  And when it comes to being inspired to give our best effort at work, we scored higher than 77% of other organizations.

Leadership IQ  also helped us collect and analyze what our employees said are the characteristics of those who succeed and enjoy working on our team — as shown in the following word cloud: What does it mean to be a “Citizant”?

“Citizants” come in all shapes, sizes, and colors but they all have the Citizant core values at heart—they’re what binds us. To illustrate the unique culture here, several associates shared what the company’s core values mean to them and what it means to be a “Citizant.”

The company will fully support your career goals.

I started here as a Senior Architect supporting one of our major Federal Civilian clients. Through hard work and dedication I’ve been able to advance my career within Citizant, and I feel that I’ve earned the respect of my peers and supervisors. I’ve also had the opportunity to participate in a broad spectrum of corporate activities, and I learn something new every day that I can apply to my current role immediately. Working here at Citizant is the first time I’ve been able to chart my career path and goals, and see it actually come into fruition.

If you leave for another opportunity, you’re welcomed back.

I was hired at Citizant in 2008, and worked here for three years. I loved my job! It was fast-paced, rewarding, and challenging. I was able to take on responsibilities beyond my job description, making it a true learning experience. When there was a shift in management, I felt it was time to move on. I took a job at a large corporation. While the people were wonderful, roles and responsibilities did not overlap. There were definite boundaries, with little wiggle room. I felt boxed-in. At Citizant, resources were limited, but opportunity was endless.

When asked if I wanted to come back [in 2013], I jumped at the opportunity and am happy I did. I was offered all the support I needed to get going, and have never been turned down for any training requested. I feel management has provided support and mentoring since I returned. I am thankful I rejoined Citizant.

When the Government was Closed, Citizant was Open

There’s probably no better example of Citizant culture or spirit than what occurred here during the Federal Government shutdown from Oct. 1-16, 2013.

After the first week of the shutdown, Citizant’s leadership saw that many employees didn’t have enough paid leave to last another week.

Company-wide emails kept everyone updated. Many employees agreed to donate their unused leave to keep others on the payroll as the stalemate entered a 2nd week.

With those leave donations, executives closed the gap of almost 1,300 hours, ensuring that all impacted Citizant employees were fully paid throughout the entire shutdown.